“The Unquowa School was founded and incorporated as a not-for-profit school in 1917 by an association of parents for the purpose of providing a school in which their children could acquire at least the same valuable information and skills that they would get in ordinary schools, but under conditions such that their health would be better safe-guarded, their social spirit more highly developed and their growth in power more definitely provided for.” 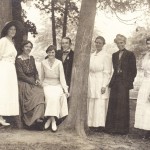 Founding Head of School, Virginia Birdsall (second from left), with members of the original faculty 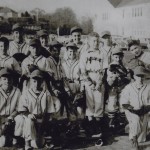 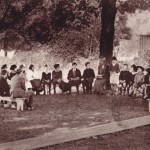 Like many early activities at Unquowa, this community meeting was held outdoors. 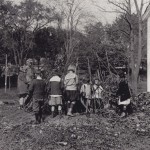 Building a life sized wigwam in the 1920s 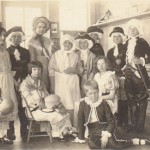 An early study in humanities and history 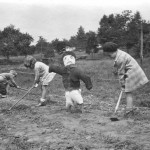 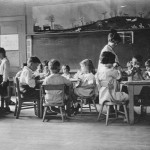 Serving snack in a Lower School classroom in the 1920s 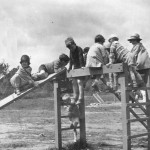 Younger students playing during recess in the 1920s 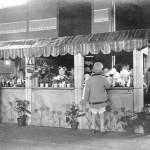 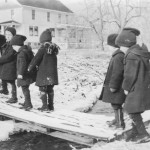 Outdoor play, regardless of the weather, has always been an important part of Unquowa’s program… 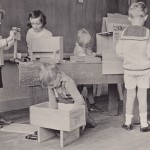 … as have woodworking and building things.

The mission statement of the school in 1917 accurately captured the inspiration and idealism of the school at that time. The Unquowa School was born of progressive roots and influenced not only by the progressive educational philosophy of John Dewey, but also by that of Marietta Johnson, who founded the Organic Education Movement in 1907. Founding parents met Ms. Johnson when she was lecturing in Fairfield County, impressing upon her audiences the importance of experiential learning, the hallmark of her philosophy. The Unquowa School’s first headmistress, Virginia F. Birdsall, and other school heads who followed—especially Carl Churchill, who was the longest sitting headmaster of the school and greatly beloved—were responsible for establishing the school in its early decades as a place where children could receive a strong elementary school education that prepared them for well-respected day and boarding schools, while still offering them the chance to move beyond the classroom desk and into the school’s woodshop, brooks and forest to learn through experience.

Alumni who attended The Unquowa School in those early decades still credit it with laying the foundation for a life of learning. As one alumna put it, “The awakening of the questioning mind was, perhaps, the greatest gift Unquowa gave me.”

At the 75th reunion of the school a former headmaster captured the essence of the school when he stated that it holds the child at the center of its purpose, and that every child at Unquowa receives the love, respect and security that they would expect to receive from a family.

Educating the whole child is still at the school’s core—the classes and school itself are small, the teachers know the children, and every child is developed to his or her full potential. Our children graduate from eighth grade prepared academically and socially to go on to well-respected day and boarding high schools. The mission of our school has not changed since its founding, and it has been the primary draw of Unquowa to families with elementary age children, regardless of the time period.