Where the Garage Meets the Classroom

As Frank R. Wilson so beautifully put it in his preface to The Art of Critical Making, “objects brought to life by a maker… will not only foster confidence and vitality but also sharpen personal identity and add meaning to the experience of consciousness.”

Making things, problem solving and learning-by-doing have been at the heart of Unquowa since our school’s inception in 1917. Our school’s 1500 sq ft makerspace provides us with bigger and better space for activities that involve making, un-making, tinkering and designing. It is the place where the garage meets the classroom, and offers students a chance to bring their ideas to life using materials ranging from wood, metal and fabric to robotic components and 3-D printing. 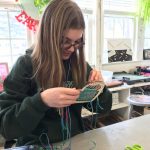 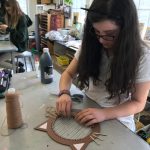 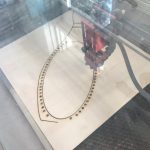 Is weaving an art or a craft? That was the question that sixth graders started with as they journeyed through the history of textile production and landed squarely in the middle of contemporary fiber arts. We learned that weaving can be utilitarian, fine art, or it can even be a powerful social statement as seen in the work of Sonya Clark. Students created their own looms using Adobe Illustrator and then printed them on wood using the laser cutter in the Makerspace. They then added the traditional warp and weft strings to create a weaving that complemented the looms. So is weaving an art or a craft? Sixth graders would say it is both! 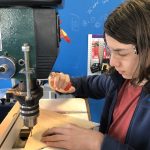 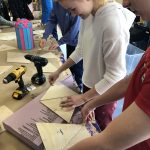 Geometry students have completed the prototype and the final build of our 8th Grade math project is underway! Students have mapped out the construction process and have begun to trace, cut, and sand isosceles triangles to build the dome for their 2.5 meter tall R2D2. They have tested various hinge arrangements to attach the triangles and seem to have settled on a good working model. Stay tuned for more updates from the Unquowa Industrial Automaton and Makerspace!

How to Trap a Leprechaun! 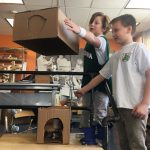 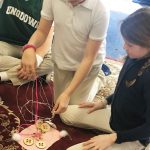 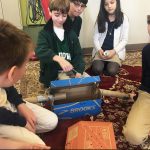 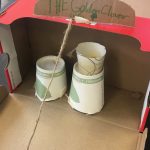 Leprechauns are greedy and sneaky and love shenanigans! So how do you trap one? Fourth graders know, you employ math and engineering skills!

After reading about a mischievous leprechaun in the book Leprechaun Trap by Adam Wallace grade four students went to work to create an efficient but also cost-effective trap. Students discovered that to be successful, they had to think like a leprechaun. Character traits from the story were identified as the students designed and redesigned. We discussed the field of engineering materials and items were carefully chosen not only for their utility, but also with a eye on the cost effectiveness. Each material they chose to use in their design had a price attached. Once completed, students added to find the cost and worked with decimals (our next unit in math!) to give a final cost analysis. In the end, our students presented and demonstrated their projects and the thinking that brought them to their final design. Even Mr. R-M couldn’t resist getting in on the fun! 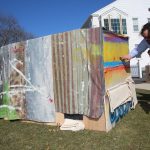 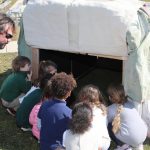 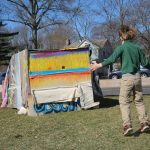 Working together in teams, students in grades three through six have all been part of a project to design and build a walk-in camera obscura in the Makerspace.

Children have been exposed to screens throughout their lives and this opportunity to step back in time and reflect on the projected image has been an interesting challenge. Students are so used to seeing images projected that it seems almost obvious to them that light through a hole would produce one. It turns out it is rare to have a projected image occur by simply focusing light through an aperture. The students have eagerly explored the mechanics of how this seemingly magical and simultaneously obvious phenomenon works.

This photo sequence is of 1) the kindergarten class being shown the camera and its aperture, 2) gathering inside for a demonstration and 3) Riley jumping outside in front of the aperture so that his image could be projected on the (then closed) back flap. His classmates were delighted and amazed to see him projected on the back flap!

Their functioning prototype has taught them about light, vision, projections, cameras, and more. We all love this project and look forward to seeing where it goes next … perhaps a larger permanent installation! 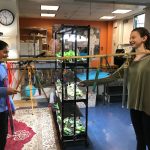 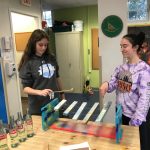 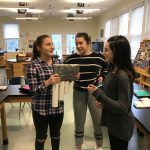 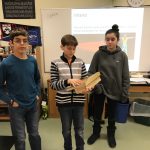 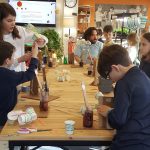 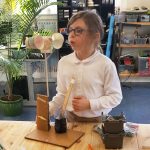 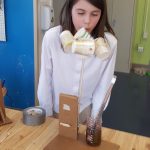 After studying the Spanish vocabulary needed to discuss and understand the weather, Grades 3 and 4 built their very own weather stations in the Makerspace. The students enjoyed expanding on what they learned in Spanish class by going deeper into the science of weather and designing their own weather stations. Their simple construction materials included paper cups, popsicle sticks, strings of hair and more.