Eats in the Middle East 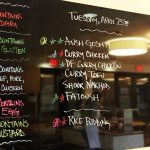 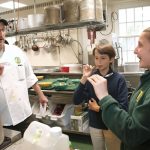 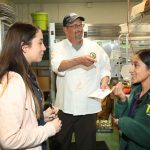 In our humanities program, we believe that for a student to understand a culture they should be exposed to as many aspects of it as possible. There is one universal element that seems to bind all members of a culture: food. During our study of the Middle East and Afghanistan, our seventh-graders were given the assignment to develop a traditional Middle Eastern menu that included soup, salad, main course, and dessert. Before creating them, Chef David taught our class about traditional dishes and commonly used ingredients throughout the Middle East. Working in groups, our students threw themselves into the assignment, creating menus that demonstrated a breadth of knowledge one could only attain by attending a culinary class (or watching countless hours of the Food Network). Some of them even tried the food prior to including it on their menus to ensure they were delicious!
Each group submitted their menus to our kitchen staff with the hope that their dishes would be selected by Chef David and Chef Jessica and included on their Middle Eastern lunch menu on Tuesday, April 25th. It included a fattoush salad, aush soup, curry chicken with a side of chickpeas and mint called shour nakhod, and rice pudding for dessert. Those students whose recipes were chosen introduced them to the rest of the student body by describing their ingredients and flavor profiles. It was a tremendous success, and we were so proud of our seventh graders’ enthusiasm, creativity, and willingness to broaden their palates. Thank you to our wonderful kitchen staff who not only agreed to help us in our discovery of Middle Eastern cuisine but fueled it as well. We are all so fortunate to be your patrons.