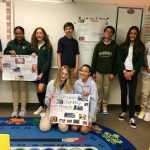 Every year during September 15 thru October 15 is the celebration of Hispanic Heritage Month in the United States. The purpose of the celebration is to recognize the contributions of Hispanic and Latino Americans to the country’s history, heritage and culture. The observation started in 1968 as Hispanic Heritage Week under President Lyndon Johnson and was expanded by President Ronald Reagan in 1988 to cover a 30 day period. The day of September 15 is significant because it is the anniversary of independence of Costa Rica, El Salvador, Guatemala, Honduras and Nicaragua. Mexico and Chile celebrate their independence in September 16 and 18, respectively.

-The term Hispanic or Latino, as defined by the U.S. Census Bureau, refers to Puerto Rican, South or Central American, or other Spanish Culture or origin regardless race

-California has the largest Hispanic population in the United States

-Spanish is the second most spoken language in the United States

As part of the Spanish class, 8th graders created their own posters to talk about Hispanic Heritage Month. The Head of school attended the presentation.