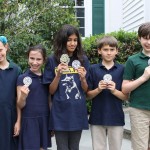 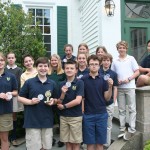 We have just completed our twentieth year of participation in the Mathematical Olympiads for Elementary Schools. The contest provides challenging non-routine problems that stretch the abilities of upper elementary students. Our fifth and sixth grade students employed a variety of problem-solving strategies to complete a series of five contests from November to March.

Five fifth graders earned Olympiad patches for scoring 10 or more points out of a possible 25: Antara, Brooke, Lauren, Alex and Daniel. The fifth graders do the exact same problems as the sixth graders, so their accomplishment is very impressive. Antara earned the trophy for the highest score in fifth grade. In the sixth grade, Tommy, Lisi, Mimi, Shepherd, Danny, William, Aaron, Alexandra, Ethan, Naia, Lola, Patrick, Drew and Carrie earned Olympiad patches. Aaron, Patrick and Drew received silver pins for their scores in the top 10%, and Aaron received the trophy for the highest score in sixth grade.

Congratulations to all the participants on a successful year of problem solving!