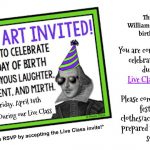 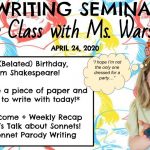 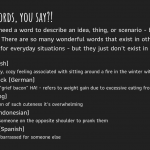 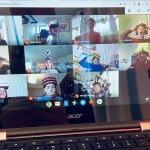 Students learned all about the Bard’s prolific career. He wrote at least 37 plays, penned 154 sonnets, and invented more than 420 words! After learning a bit about Shakespeare’s life, and finding that he invented words like “cold-blooded,” “flowery,” and “beachy,” we investigated words from other languages that do not have an English translation. We then considered what words we could add to our language to capture specific feelings, emotions, actions, or things.

Have you ever experienced either of these new words?

tightstring (n): the feeling you get when you’re all anxious and giddy inside, like when you are waiting in line to say your poem out loud to a big crowd.

screamtastic (adj): describes the feeling you get when you go on a roller coaster – scared and excited at the same time.

We then examined Shakespeare’s Sonnet 18, “Shall I Compare Thee to a Summer’s Day?” After analyzing the original, and understanding the structure of an English sonnet, we decided to get a little creative. Using our knowledge of the parts of speech, we crafted parody sonnets using a “Mad Lib” technique. These sonnets were a humorous way to celebrate the Bard’s big day! Check out some of them here!

We learned that when William Shakespeare was forced to quarantine during an outbreak of the plague, he turned to poetry writing as his plays could not be performed. Perhaps we’ll produce the next Bard when we finally emerge!

← Solar Panel Update Building Relationships with Those Near and Far! →