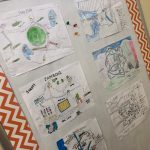 Coming back from Winter Break is always difficult. It can take students (and teachers!) some time to ramp back up to the rigors of academic life after two weeks.

That’s why, in seventh grade, the Humanities team chose a game to kick off the new year!

But not just any game… a geopolitical game of intrigue and trade!

“Nations: A Simulation Game in International Politics” (shortened to the “Nations Game” in class).

A bit like a fantasy version of Model United Nations, the Nations Game presents students with a fictional continent full of countries that have tenuous relationships with one another. Some countries are highly religious, others have superior military strength, and yet others have plenteous natural resources. Students are assigned as heads of state, diplomats, and journalists of a particular country, and throughout the two weeks that the game runs, are required to trade, make treaties, establish alliances, complete secret missions, and acquire resources from other countries. Making war between nations is disincentivized (though occasionally still happens) as students are encouraged to use diplomacy to solve international problems.

And then we just kind of… let them go!

We had trade meetings, military alliances, false accusations, and terrifying brinkmanship – just about everything that happens in the real world! In addition, students created political maps of their countries, national anthems, and wrote news articles to promote their fictional country’s agendas. (Some might have included some propaganda and misinformation, but that’s how these things work!)

After completing the game, students reported that they understood how diplomacy in the modern world works and decided that working other nations is more effective than trying to accomplish goals on their own.

It was an incredibly energetic and vibrant start to the new year, and a fun one at that!