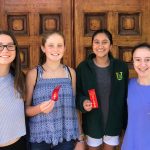 Four eighth grade girls represented The Unquowa School in the annual Science Olympiad held on the 23rd of September at Lauralton Hall High School. The girls competed against several other eighth grade teams in a test of science skills. Our team, made up of Brooke, Maddie, Abby and Sneha were called the Orbitals. The girls, working as a team had to prove spatial reasoning prowess with a Tangram puzzle challenge, demonstrate prior knowledge by matching bird adaptations, and think like engineers to build wind powered cars out of lifesaver mints and paper. Task pressure was added by competing against other teams and the clock. Congrats to the Orbitals for our first top three finish in the past seven years!