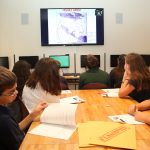 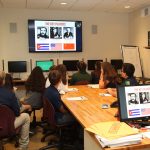 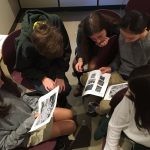 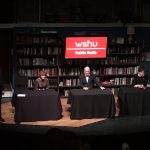 Last year, our seventh and eighth-grade humanities classes met with Corey Flintoff, NPR’s former Russia correspondent, to discuss Russian propaganda. Our students were so impressive that this year we were invited to attend a Westport Country Playhouse production titled The Letter Box: The Cuban Missile Crisis, a dramatic reading of the private correspondence between John F. Kennedy and Nikita Khrushchev during the 13-day nuclear stand-off, followed by a symposium moderated by Mr. Flintoff himself. In order to prepare, both classes studied the Cuban Missile Crisis by first examining the history of relations between the Soviet Union and the United States and the cultural ideals that have divided us. Furthermore, the seventh graders read Julia Alvarez’s short story “Snow” to gain a student’s perspective of daily life during the Cuban Missile Crisis, while the eighth graders watched a BBC documentary on the Soviet view of the conflict. On the day of The Letter Box, both classes participated in a virtual field trip to The International Spy Museum where they assumed the roles of CIA analysts in a simulation of the Crisis. The students researched declassified documents and surveillance photos to determine whether or not JFK should send another U-2 mission and to confirm or deny the presence of Soviet nuclear weapons in Cuba. They worked in teams to piece the evidence together just as the CIA had to in 1962. That night, a large number of the 7th and 8th graders filled the balcony of the Westport Country Playhouse to see Kruschev and Kennedy’s letters read by famous actors. Brooke and Sneha were brave enough to ask the panel about how aware the Soviet civilians were throughout the standoff, which impressed experts and the rest of the audience. It was a great moment, and they truly embodied the “unafraid spirit” we look to instill in all Unquowa students. It was such a joy to see our students tackle such a serious issue with maturity and vigor, and recognize how diplomacy prevailed and the world was better for it. In his famous television address to the nation, Kennedy said, “Our goal is not the victory of might, but the vindication of right- -not peace at the expense of freedom, but both peace and freedom, here in this hemisphere, and, we hope, around the world.” It is safe to say our middle schoolers have taken up that cause with distinction.

← A Visit To The Local Firehouse Math is Delicious! →