One of the “Fun Friday” activities for first and second grade this month was parachute games. While these games require muscular strength and endurance, cooperation is key to making them work. The students first mimicked a merry go round, moving the parachute clockwise and counterclockwise as they walked, ran and skipped. Using a variety of arm movements, the students then rippled small, medium, and large “waves.” Afterwards, they popped “popcorn” by shaking small balls on the surface of the parachute. Finally, the students made a “mushroom.” Inside, they played high-five and finished with a Go Gators! cheer. While the students acknowledged their tired deltoids, biceps, and triceps, the muscle that got the biggest workout were the abdominals–from all the laughter! 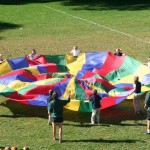 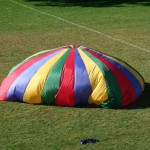 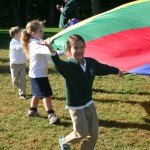 ← "Shake Hands, now move to the next one!" A Very Musical Assembly! →