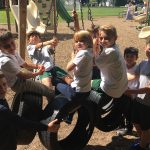 This week both sections of 5th grade came to meet their new kindergarten buddies and get to know them. We spent some time acclimating ourselves and then did a simple opening activity writing what we liked about our new friends. The 5th graders wrote observations of their kindergarten buddy based on this brief encounter. For them, this activity will be a springboard for their upcoming unit on the interaction between the early colonists and explorers and the Native American people. We were hoping to impart that first impressions can often be deceiving and are always influenced by your perception of the world. As we come together this year to study topics of world culture, history and social justice we plan to keep this in mind.